What is Culture? (Kwast’s Model)

Adjusting to a new culture can be difficult. This article is one element from the CIT Next online course Culture Shock.

What is culture? Maybe the most practical definition for culture is that it is “the rules by which the game of life is played.” Likely you grew up in a culture with a set of ‘rules.’ These rules were clear to you even if some of them were unstated and subconscious, and so you navigated through the culture with relative ease (with the probable exception of the middle school smile). Now you find yourself in a new culture with different rules.  What are they? How are you going to learn the new rules?

This resource is good for those who are planning on becoming an international missionary.

Are you past the fun and now into the challenges of living and ministering in a new culture? There are some good principles that you can put into practice as you seek to weather culture shock and adapt well to the place where God has sent you. Survival is not the goal; rather, the goal is to allow God to grow you in a way that prepares you to understand and love others around you. Cultural Shock may be just the course that will help.

For more information about the Culture Shock course and to register, visit here: www.grow2serve.com/ca

For more CIT Next Resources

What is Culture? (Kwast’s Model)

Have you ever played a game in which you did not understand the rules? You’re not going to win in a game like that. In a similar way, not understanding the culture you are now living in will put you at a huge disadvantage.

Maybe the most practical definition for culture is that it is “the rules by which the game of life is played.” Likely you grew up in a culture with a set of ‘rules.’  These rules were clear to you even if some of them were unstated and subconscious, and so you navigated through the culture with relative ease (with the probable exception of the middle school smile). Now you find yourself in a new culture with different rules. What are they? How are you going to learn the new rules?

Is Culture Good, Bad, or Neutral?

Beyond the basic definition, how do you see culture? Are all cultures good and should be affirmed? Or would you say that all cultures are bad and should be reformed? We would say the answer is partly both of those two extremes. As the following comment from The Seattle School of Theology and Psychology summarizes:

“Every culture attempts to flee God and yet find life in its own gods. Every culture reflects both the glory of creation and the depravity of the fall. We believe a person or community can never receive a hearing, nor offer the gospel, unless it incarnates the gospel through joyful participation in a culture’s glory and honest engagement in its darkness. We wish to develop lovers of the language, story, drama, film, music, dance, architecture and art in order to deepen our love of life and the God of all creativity. The result will be a greater desire to know the human heart, the word of God and the coming and already present Kingdom of God.”

Crossing Culture from Heaven to Earth

Though mankind was created good, our rebellion, beginning with Adam and Eve, leaves us fallen from the glory of creation. God in his love and wisdom was not content to leave us in our fallen state. Instead, he sent his son, Jesus, who took on “flesh and dwelt among us” (John 1:14) living a perfect life and dying a death that paid for our sin and made restoration to the glory of creation possible.

As missionaries, we are called to follow Jesus’ example and take on the “flesh” of cultures full of lost people. In the same way that the Apostle Paul became all things to all men in order to reach some (1 Corinthians 9:19-23), so we are called to join the culture… to adapt… to assimilate. This is all in an effort to communicate the message of the gospel in the cultural framework of the respondents – employing words and symbols that reflect the unique culture we are called to reach.

The reason we need to take culture learning seriously is because if we don’t, our efforts at being messengers of the Gospel will be hindered by our conscious or subconscious ethnocentrism.

Getting to the Heart of Culture

If culture makes up “the rules by which the game of life is played,” then you must be committed to understanding the rules of the new culture. To guide us in this quest to understand, we see culture as the shared behaviors, values, beliefs and worldview of a group of people. 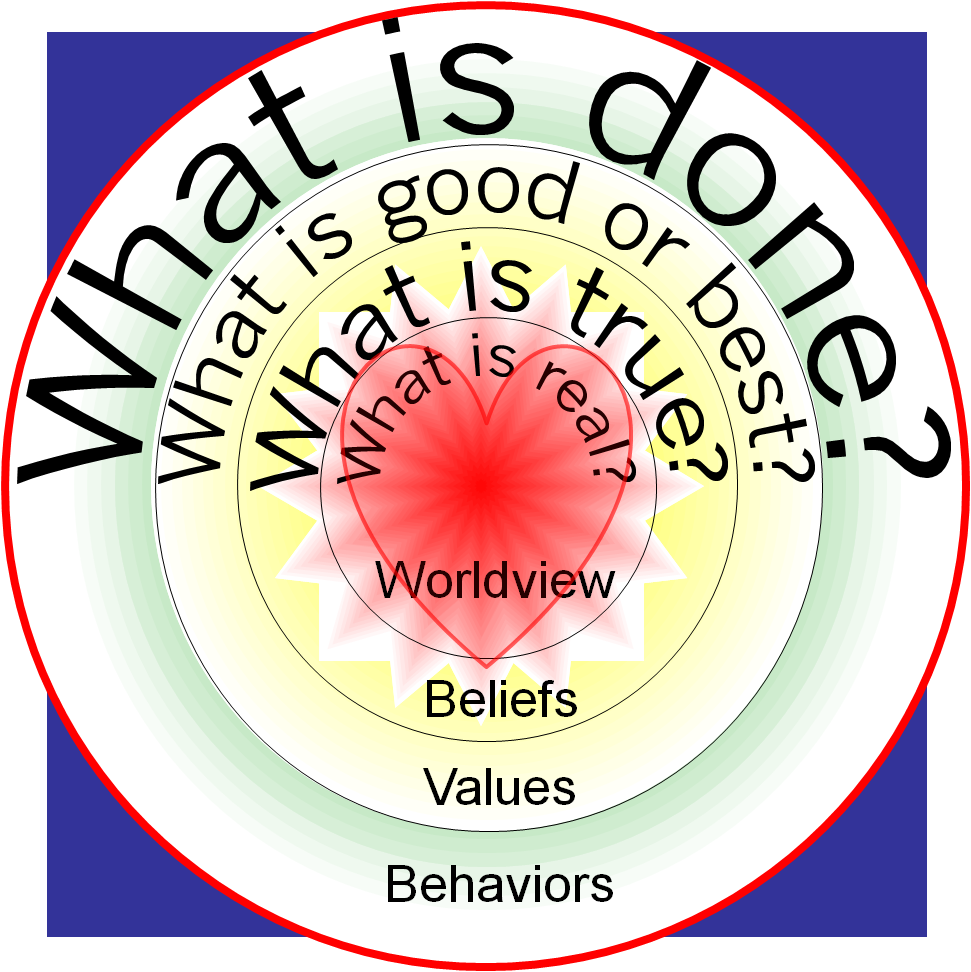 The above model, created by anthropologist Lloyd Kwast, demonstrates culture as an ever deepening interface of behaviors, values, beliefs, and worldview.

Diagram taken from “Understanding Culture” by Lloyd Kwast, published in the second edition of Perspectives on the World Christian Movement, © by William Carey Library

By behavior we are talking about the activities and rituals that comprise a common and shared routine within a cultural group. This includes greetings, gestures, responses and ways of interacting that are expected if someone is to be accepted by others in the group. Every culture establishes certain standards of behavior regarding all of these things. Some of these practices are obvious to the outsider, while others are not.

Understanding the behavioral aspect of a culture will help you answer the following questions:

1.     The food. How is it produced? How does it taste?
2.     How are typical homes laid out? How are they furnished and decorated?
3.     The way people dress. How is the way they dress practical? In what ways does dress classify people in the society?
4.     What do people do for leisure and recreation?
5.     What occupations are common?
6.     Greetings. Do greetings differ according to setting, relationship, etc?
7.     Major celebrations and holidays.  What are they and how do people observe them?
8.     Gender roles and family norms. Who prepares meals, trains the kids, provides financially, etc.

By values, we are talking about deeply held preferences for one state of affairs over another. These include ideals, principles, feelings, and conditions of a society toward which the people of the group have an affective (emotional) regard. People see their values as positive with corresponding negative opposites. For example: honesty versus dishonesty, clean versus dirty, rational versus irrational, etc. Individual people have personal values, but we are looking for the shared values of your people group. Cultural values are more difficult to identify than behaviors because they are not directly observable. They require you to accurately interpret behaviors.

Understanding the values of a culture will explain the following:

1.     What traits do people value in others?
2.     Who are considered heroes? What makes a hero?
3.     Do people like to work independently, or together?
4.     What are the major areas of societal pain and suffering?
5.     Who are recognized as leaders in the community?
6.     Are people motivated to do the right thing by social pressure (shame) or by rules and laws (guilt) or by animistic power (fear)?
7.     Attitude concerning money and property. Does property have a symbolic or utilitarian value? Is it freely shared or held privately?

Cultural values are based on cultural beliefs. Beliefs are underlying convictions concerning truth. People of the same culture hold common beliefs that help them understand the world and each other. It is these beliefs that dictate values. Beliefs are acquired early and held deeply. They are not observable and may not be discussed very often since they are self-evident to the believer. People may have two sets of beliefs – one set that they profess and another that they actually live by. You may have to determine the difference.

The beliefs of a culture will explain the following:

The deepest level of culture is worldview. A worldview is a set of preconceptions and assumptions that deal with the deepest issues of existence and govern beliefs, values and behavior. It provides the perspective from which the world is seen and interpreted. Real change does not happen within a person or culture until their worldview is impacted.

A worldview provides answers to questions such as:

(These Worldview questions are from The Universe Next Door, James Sire, p 20)

Taking the time to learn the rules of the game, to understand the culture, will give you the best opportunity to find yourself at home in your new context. It will also lead to deep meaningful relationships and increase your ability to communicate the gospel. Our encouragement is that you dig into this with everything you have. It will pay off.

1 review for What is Culture? (Kwast’s Model)

Only logged in customers who have purchased this product may leave a review.

As disciples of Jesus we are called to continually grow, learn, serve, and be fruitful in ways that bring glory to God. Grow2Serve exists to help people fulfill this calling through learning and are passionate about helping that calling be a reality.

View more resources from this partner